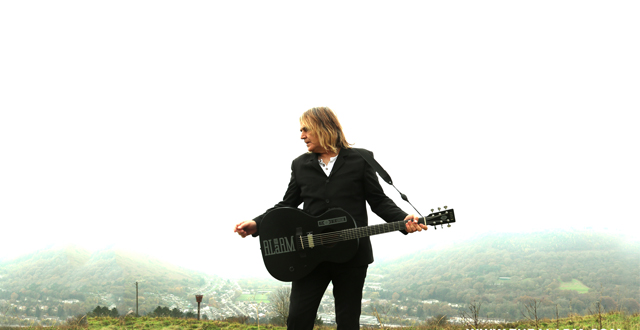 The acoustic tour will further coincide with the worldwide release of the Hurricane Of Change – 30th Anniversary Album Collection which will feature new and updated acoustic based recordings of all the songs associated with this memorable era of Alarm History.

Honouring the release of The Alarm’s late 1980’s trilogy of iconic album’s ‘Eye Of The Hurricane’, ‘Electric Folklore’ and ‘Change’, the tour will feature intimate readings of some of The Alarm’s most famous songs such as Rain In The Summertime (1987 – International Top 20 Hit), Sold Me Down The River (1989 – Number 1 Rock Songs in the USA) and A New South Wales (1990 UK Top 40), alongside a host of Alarm standards as captured on the 1988 live album ‘Electric Folklore’.

30 years ago, as Mike Peters undertook a creative song-writing journey through the heart of his home country – Wales, the Berlin Wall would fall and Europe itself, would plunge into a period of enormous and seismic change. Caught in the middle of this political maelstrom, Mike Peters and the Alarm would record the albums ‘Eye of The Hurricane’ (1987), and ‘Change’ (1989) both of which would capture in their own way, the essence of these most turbulent times.